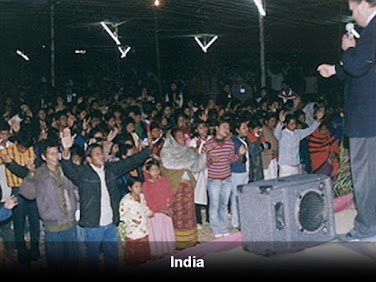 This true story opens the 1st chapter of my latest book, Prophets and Prophecy,
availalable from Amazon in both paperback and Kindle.

It was April of 1983 and I had arrived in Shillong, Meghalaya in northeast India to minister for 10 days among the Khasi people of that region. I was staying in the home of my host, Dr. R. Joseph Skinner.

The night before our first service, God gave me a word of prophecy to speak forth in that service. Interestingly, I knew that the message I had been given was an interpretation to a tongue. I Corinthians 14:5 tells us that tongues with interpretation is equal to prophecy, and I knew that I was to wait for a message in tongues before speaking the prophetic message I had been given.

This raised the question in my own mind as to how I would know when somebody gave a message in tongues, since I knew nothing of the Khasi language. In addition, I did not know if they even practiced messages in tongues and interpretations in their services.

I went to the church service the next morning in faith and with a determination to be spiritually alert and see how things would unfold. The small building was packed with every seat filled and people standing shoulder to shoulder, filling every nook and cranny.

I stood alongside several other leaders on the platform and someone began to lead in singing and praise in the Khasi tongue. At the close of the singing there was a long, extended time of fervent, corporate prayer. The crescendo of prayer eventually descended until everything became still and quiet. No one moved or spoke, including the leaders on the platform.

Suddenly, from out in the congregation, the silence was broken by someone speaking in a beautiful, melodious tone.  I was alert and thought to myself, “That sounds like a message in tongues.”

I then stepped to the microphone and gave the interpretation I had been given the night before, which was a word of encouragement to that congregation. I finished speaking and one of the Khasi pastors stepped forward and interpreted to the people in their language what I had said. Shortly thereafter, the service was turned to me and preached my first sermon in India.

After the service, I asked my host, Dr. Skinner, if that was a message in tongues to which I had responded. He said, “Yes, that person spoke in an unknown tongue.” Wow!  God had worked the prophetic gift through two people of different languages and cultures who had never met! And it flowed so seamlessly.

God used this manifestation of prophecy to introduce me to the Khasi people. It brought an immediate acceptance and respect that I could not have earned on my own. We then had a wonderful 10 days of teaching, preaching, and powerful ministry of the Holy Spirit.

It was also the beginning of a life-long friendship with the late Dr. Joseph Skinner, his brother, Kitbok Ryntathiang, and the Khasi people of northeast India.

This article is derived from Dr. Eddie Hyatt’s latest book, Prophets and Prophecy, with the subtitle, Timely Insights from the Bible, History, and My Experience. It is availalable from Amazon in both paperback and Kindle.