I DON'T HAVE ENOUGH FAITH TO BE AN ATHEIST

The Teleological Argument
for the Existence of God
(Excerpted from the manual "Think Biblically" available at this link. http://www.eddiehyatt.com/think_biblically.html#BOOK)

DEFINITION:  Teleological is derived from the Greek word teleos meaning “goal or purpose.” The teleological argument for God’s existence says that the orderliness and complexity of the Creation indicates that it was created for a purpose. This approach is also known as the argument from “Intelligent Design.” Consider the few examples below.

B.              Isaiah 40:12b says that God Calculated the dust of the earth in a measure and weighed the mountains in scales. In other words, He chose just the right amount.

III.      THE SIZE OF THE SUN AND ITS DISTANCE FROM EARTH
IS EXACTLY RIGHT FOR SUSTAINING LIFE.

B.              Isaiah 40:12 says that God Measured heaven with a span. In other words, He put exactly the right distances between the heavenly bodies.

IV.       THE SIZE AND POSITION OF THE MOON IS JUST RIGHT
FOR SUSTAINING LIFE ON EARTH.

B.                      These elements are not chemically combined, but instead they are continually being mixed mechanically by the tidal effect of the moon upon the atmosphere.

A.        The ozone layer screens out eight deadly long rays, which would burn earth’s inhabitants, and the shorter rays, which are necessary for life, are admitted.

B.        The deadliest of the long rays are allowed through in a very limited amount—just enough to kill the green algae, which otherwise would grow to fill all the lakes, rivers and oceans of the world and destroy all human life.

C.        Isaiah 40:22 describes graphically this atmospheric canopy as being like a tent that God has stretched out for people to live in.

He sits enthroned above the circle of the earth, and its people are like grasshoppers. He stretches out the heavens like a canopy, and spreads them out like a tent to live in (NIV). 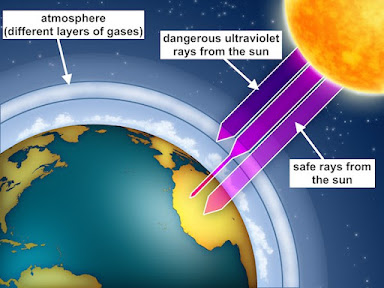