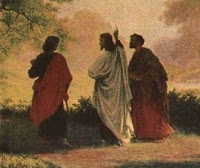 We can only imagine the pain and disappointment of those two disciples as they walked the Emmaus Road from Jerusalem to Emmaus. They were heartbroken. The One whom they they thought was the promised Messiah, that would drive out the pagan Romans and restore the political kingdom of David, had been arrested and put to death by the Romans. All their hopes and dreams had been dashed.
As they walked and talked of these things, Jesus came alongside them in His resurrection body, but they did not recognize Him. His first question was, "Why are you so sad?"
Jesus then took them through the Scriptures from Genesis to Malachi explaining why it was necessary for the Messiah to suffer and die. When they arrived at their destination, it was getting late and they invited this Stranger to stay with them for the night.
As they sat down to eat the evening meal, they must have been shocked when this Stranger took bread and broke it, for it was the place of the master of the household to break the bread.
Suddenly their eyes were opened and they recognzied Him. It was Jesus! He then vanished before their eyes.
They were so excited that even though it was late they hurried the seven miles back to Jerusalem to tell the others that Jesus was alive.
They were no longer cocnerned about the Romans. They were no longer concerned about the Pharisees, Sadducess and religious rulers. JESUS WAS ALIVE and nothing else really mattered.
Yes, we face many challenges today including a deadly pandemic and millions of people losing their jobs. But be of good cheer. There is Good News. JESUS IS ALIVE!
The Risen Lord will see us through!