THE MISSING COMPONENT IN OUR MODERN PRAYERS

I am thankful for all the prayers that are going up at this time for America and the world. I was blessed when our president called for a Day of Prayer on March 15. I am sure things would be much worse if not for these prayers.

We must admit, however, that we have not yet seen the breakthrough that is needed. The pandemic continues to rage and America, to a great extent, continues on lockown with millions suddenly out of work.

There is, however, an answer from Scritpure and from our own history as a nation that, I believe, will bring the breakthrough we long to see.

"Humiliation" is the Missing Component

The earliest immigrants to America and their descendants, right on up through the Revoutionary War, were people of prayer. However, there is a word they often used in regards to their special times of prayer that we seldom hear today--the word "humiliation."

By “humiliation” they did not mean a groveling before God or self-flagellation. They saw “humiliation” as the admission of their own human inadequacy and their desperate need for God’s intervention and help. It was the opposite of pride and self-sufficiency.

For them, "humiliation" meant acknowledging their wretched condition before God apart from His mercy and grace. They saw it expressed in biblical passages such as I Peter 5:5b-6, which reads, God resists the proud but gives grace to the humble. Therefore, humble yourselves under the mighty hand of God, that He may exalt you in due time.

Humiliation and Prayer in the American Revolution
During the fall of 1776, when the morale of the American army and populace had sunk to an all-time low because of a poor harvest and hardship on the battlefield, Congress proclaimed December 11, 1776, as a day of “solemn fasting and humiliation.” The proclamation called on all Americans,
To implore of Almighty God the forgiveness of the many sins prevailing among all ranks, and to beg the assistance of his Providence in the prosecution of the present just and necessary war (Hyatt, 1726: The Year that Defined America, 117).
After this day of “humiliation and prayer,” there was an amazing change in circumstances with successes on the battlefield and the reaping of abundant harvests. There was, in fact, such a turnaround that Congress issued a proclamation for a national Day of Thanksgiving for October 20, 1779 because, “It hath pleased Almighty God, the father of mercies, remarkably to assist and support the United States of America in their important struggle for liberty” (Hyatt, 1726: The Year that Defined America, 117).
Humiliation and Prayer Saves the Pilgrims 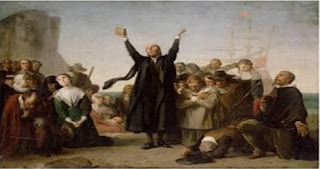 The coupling together of “humiliation and prayer” had been a part of America from the time of the Pilgrims, who observed a day of “solemn humiliation” and prayer before embarking on their journey to America. And during the long, hot summer of 1623 when it looked as though their crops would all be destroyed, Governor William Bradford called for a day of “humiliation and prayer.”
Their day of “humiliation and prayer” began like so many previous days and weeks, with not a cloud and in the sky and the hot sun beating down. However, before the day was over, and to their great delight, clouds gathered and a gentle rain, without wind or thunder, came down and revived their crops and probably saved their lives (Hyatt, Pilgrims and Patriots, 34-35).
Indeed, the word "humiliation" was commonly coupled with calls for prayer throughout America's early history. For example, John Hancock, issued a Prayer Proclamation while serving as governor of Massachusetts in 1793. Hancock, a signer of the Declaration of Indipendence and President of the Continental Congress, called on all citizens of the Commonwealth to observe "a day of solemn fasting, humiliation and prayer (Hyatt, Pilgrims and Patriots, 173).
Humiliation and Prayer Preserved the American Union
“Humiliation” as a necessary ingredient for successful prayer was not lost on succeeding generations. When Abraham Lincoln called the nation to prayer during the midst of the horrible Civil War, he listed pride and self-sufficiency as sins for which the nation must repent. In his Prayer Proclamation for April 30, 1863, the president said,
We have been preserved these many years in peace and prosperity. We have grown in numbers, wealth and power as no other nation has ever grown. But we have forgotten God and have vainly imagined, in the deceitfulness of our hearts, that all these blessings were produced by some superior wisdom and virtue of our own.
Intoxicated with unbroken success, we have become too self-sufficient to feel the necessity of redeeming and preserving grace, too proud to pray to the God that made us! It behooves us then to humble ourselves before the offended Power, to confess our national sins and to pray for clemency and forgiveness.
And I do hereby request all the people to abstain on that day from their ordinary secular pursuits, and to unite, at their several places of public worship and their respective homes, in keeping the day holy to the Lord and devoted to the humble discharge of the religious duties proper to that solemn occasion (Hyatt, 1726: The Year that Defined America, 185).
There was tremendous response to this call for a day of humiliation and prayer. Lincoln himself said,
I went to my room and got down on my knees before Almighty God and prayed. Soon a sweet comfort crept into my soul that God Almighty had taken the whole business into His own hands (Hyatt, 1726: The Year that Defined America, 187).
Shortly thereafter, Union forces won a decisive victory over Confederate forces at Gettysburg and this proved to be the turning point of the war. The American Union was saved by humiliation and prayer.
What About the Church Today?
Is not the call to prayer and "humiliation" appropriate for America and the American church of today? Have we not become proud of our great mega churches, or mass choirs, our worship events, and our church structures? Is it possible that we are more like the Pharisee than the publican?


In Luke 18:9-14, Jesus told of two men—a Pharisee and a publican--going to the temple to pray. The publican’s prayer was heard and answered by God. The Pharisee’s prayer was ignored by God.
The difference was not in the place where they prayed, for they both prayed in the temple. Nor was the difference in their posture for they both stood and prayed.
The difference was in the attitude of the heart. The pontificating Pharisee expressed an attitude of smugness, self-sufficiency and pride. The publican, in contrast, expressed an attitude of abject spiritual poverty, acknowledging his desperate need for God’s mercy and grace in his life.
The publican sort of prayer has saved America through numerous times of crises that could have destroyed her. It is the prayer that will save her again today.
The Greatest Threat to America
Matthew 5:3 in the NKJV says, Blessed are the poor in spirit for theirs is the kingdom of heaven. The phrase, the poor in spirit, may also be expressed as, those who realize how much they need God. It is those who realize their own human frailty and their desperate need for God’s mercy and grace in their lives who will see His kingdom power at work in their midst.
The greatest threat to America at this time is not the coronavirus. The greatest threat to America is a proud, self-sufficient church that has no sense of her own need. This was the case of the Laodicean church whom Jesus rebuked, saying,
So then, because you are lukewarm, and neither cold nor hot, I will vomit you out of my mouth. Because you say, I am rich, have become wealthy, and have need of nothing—and do not know that you are wretched, miserable, poor, blind and naked . . . (Revelation 3:16-17).

We will also see the great, national spiritual awakening for which so many long, for the promise of a national healing in II Chronicles 7:14 begins with the condition, If My people, who are called by My name, will humble themselves and pray . . ..
This article was derived in part from Dr. Eddie Hyatt's latest book, 1726: The Year that Defined America, available from Amazon and his website at www.eddiehyatt.com. He is also the founder of the "1726 Project" that is dedicated to helping America reconnect with her Christian roots in Spiritual Awakening.
Posted by Eddie Hyatt at 1:06 PM