A POWERFUL LESSON ABOUT LIFE FROM MY BROTHER'S DEATH 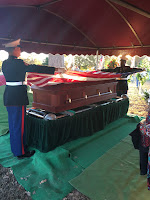 On Wednesday of this past week, I preached the funeral service for my older brother, Royce “Pete” Hyatt, the last surviving member of my family. Pete was not just a brother, he was also the very best of friends and a faithful supporter of our ministry. He was a rock of strength to his family and all who knew him. He will be sorely missed.
Pete, who was seven years older than me, faced death the way he faced life—with faith and courage. Three weeks before his death, he asked that we stop praying for healing, stating that he wanted to go home.
He made his funeral easy for us in that he planned the entire service and insisted that it be a celebration of his home going that would bring glory and honor to God. I believe his wishes were fulfilled.
There were tears but even more laughter and shouts of praise during the service. There were several songs and Pete even arranged to sing at his own funeral via a CD. At his request, I was the last of four ministers who spoke.
The service lasted for more than 90 minutes. Afterwards, an elderly woman said to me, “That is the only funeral I have ever attended that I enjoyed.”
As a young man, Pete served in the United States Marine Corps and his coffin was draped with an American flag. There was a military honor guard at his graveside featuring the haunting sound of “Taps’ being blown on the bugle, the official folding of the flag, with it being presented to his widow, Betty.
A Deep Faith with a Touch of Humor
In life, Pete exhibited a blend of a deep faith, strength, and a unique “Pete Hyatt” sense of humor. These characteristics were obvious right to the very end.
For example, shortly before his death, several came during the day and visited with him at his bedside. Others called and he talked with them and encouraged them in their faith. By the end of the day, he was quite weary.
As night was falling the phone rang again and as Betty reached for the phone, Pete said, “Tell them that Elvis has left the building.”
Pete was a giver and he often mixed his giving with his humor. For example, he was a mechanic and taught auto mechanics for twenty-two years at the high school in Honey Grove, Texas.
During those years, I would take our car to him when it needed repairs. Even though he already supported our ministry with a monthly financial gift, he would always finish the job by handing me money and with a smile and twinkle in his eye, say, “This is for you letting me work on your car.”
A Powerful Lesson About Death & Life
In my message, I quoted the words of Yogi Berra, “It ain’t over till it’s over.” From there, I emphasized that for the Christian, death is not final. It’s not over! In fact, this is a new beginning for Pete Hyatt.
At the end of my message, I opened it up for comments from any of the several hundred people who packed the Gospel Lighthouse in Powderly, TX. Several stood and spoke of how Pete had impacted their lives. His son, Jim, expressed the feelings of many when, through tears, he said it had been hard to imagine life without his Dad.
Interestingly, I had grappled with the same feelings while making the two-hour drive for the funeral service. I had inwardly struggled when I thought of going to his home and he would no longer be there.
I had just had a very painful tooth extracted and this added to the struggle that left me feeling physically and emotionally drained. But God broke through.
I lifted my heart to the Lord and said, “Lord, I need you to fill me with Your Holy Spirit. I need your strength.” Immediately, I heard these words,
"Think on the living, not the dead. Don’t mourn for Pete. He has finished his race and he is OK. Think on the ones that remain and are still running their race. Think on how you can help and encourage them."
I knew it was the Holy Spirit, and immediately the weakness and struggle dissipated.
Run to Win
Yes, Pete has finished his race. He ran well. You and I are all still running. I, therefore, want to leave you with I Corinthians 9:24 from the New Living Translation. It reads, Don’t you realize that in a race everyone runs, but only one person gets the prize? So run to win!
Let’s run to win!

Eddie Hyatt is the founder of "The Revive America Project" and the author of several books including his latest entitled Pilgrims and Patriots with the subtitle, The Radical Christian Roots of American Democracy and Freedom. Check out his website at www.eddiehyatt.com.
Posted by Eddie Hyatt at 6:54 PM