HOW TO APPROPRIATE THE FULL BLESSING OF CHRIST'S ATONING DEATH

We need to understand the atoning sacrifice of Jesus Christ in order to lay hold of the full benefits made available to us by His death and resurrection. We also need to understand His atoning death so as not to misapply or abuse His atonement as do universalists and some who are called "grace teachers." One place to start in understanding Christ's atoning death is the Old Testament Day of Atonement, which is a type and foreshadowing of the atoning death of our Lord Jesus Christ.
A Full and Complete Atonement for Humankind
September 18-19 is Yom Kippur, or “Day of Atonement,” the most holy day of the year on the Jewish calendar. Yom means “day” and Kippur is probably derived from the Hebrew kofer, meaning “ransom.” It falls on two of our calendar days because the Jewish day begins and ends at sunset.
It was on this Day of Atonement that the Old Testament high priest went into the holy of holies, and with animal sacrifices, made sacrificial atonement for the sins of the people of Israel (Leviticus 16). Interestingly, there was to be absolutely no work on this Day. This Day was God’s idea and God’s work, with the high priest being the one carrying out the proceedings.
The Old Testament Day of Atonement was a type and foreshadowing of the atoning death of Jesus Christ, not just for Israel, but for the world. Jesus Himself said in Mark 10:45 that He had come to give His life a ransom for many. Paul speaks of the death of Christ as a sacrifice, even referring to Him as our Passover lamb. (I Corinthians 5:7). 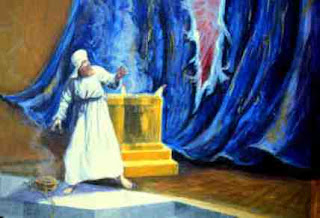 Matthew 27:50-51 tells us that at the point of Jesus' death, the heavy curtain, or veil, that cordoned off the Holy of Holies was torn from top to bottom. The Holy of Holies was the place where God dwelt and only the high priest was allowed to enter there once per year on the Day of Atonment to offer sacrifice for the sins of Israel. It was a fearful and awe-inspiring place.
This rending of the veil was an act of Almighty God showing that the way into His presence had been opened by the ultimate and final sacrifice of His Son. No longer were the masses to be cordoned off and kept at a distance, but all are now free to come into His presence through the atoning heath of Jesus Christ. As the writer of Hebrews said, "Therefore, brothers and sisters, since we have confidence to enter the Most Holy Place by the blood of Jesus . . . let us draw near to God with a sincere heart and with the full assuracne that faith brings" (Hebrews 10:19-22; NIV).

As New Covenant believers with the indwelling Holy Spirit, we judge ourselves by opening our hearts to the Lord and inviting Him to show us anything in our lives that is displeasing to Him. As He brings attitudes and behavior to our attention, we then acknowledge, or confess, our sins before the Lord as we are instructed to do in I John 1:9, a passage and letter written to believers. The results of such repentance and confession can be astounding.

This was the experience of a church, described by Charles Finney, that led to great revival. Through the convicting power of the Holy Spirit, the leaders of this church came to realize that in seeking numbers and recognition from the culture and community leaders, they had compromised their commitment to Christ. They, therefore, formulated a public statement concerning their “backsliding and want of a Christian spirit” (Hyatt, Pilgrims and Patriots, 177).
It was submitted to the congregation for their approval and then read before the congregation. As the confession was being read publicly, the entire congregation stood to its feet with many of its members weeping. Finney said that, from that moment on, the revival went forward in great power, and the opposition, which had been bitter, was silenced.
Jesus Provides a Picture of True Repentance
Jesus told the parable of the Prodigal Son to reveal the merciful, forgiving heart of God. However, the parable also reveals the attitude of heart in which the wayward son or daughter must return to the Father.
After coming to the end of himself in the pigpen, the prodigal departed for home with a different attitude. He determined that on arriving home, he would say to the Father, Father I have sinned against heaven and in Your sight and I am no longer worthy to called your son. Make me as one of your hired servants (Luke 15:18-19).
The prodigal was not perfect. He probably smelled like a pigpen. He probably had pig manure on his shoes and straw in his hair. But he had left the pig pen with a changed attitude and was headed in the right direction, back to the Father’s house. That is a picture of true repentance.
When the Father saw him afar off He ran and fell on his neck weeping. He then brought him into the house, completely restored him to his place in the family, and initiated a time of rejoicing for his safe return.
Appropriate the Atonement Blessings Today
God rejoices today when erring sinners return to Him in faith and sincerity of heart. If you have never appropriated the wonderful forgiveness and blessings of Christ’s Atonement, I urge you to do so today. Come to Him now in faith and sincerity of heart. He will receive you with open arms.
If you are a believer, I urge you to invite the Holy Spirit to search your heart for any attitudes, or any compromise with the world, that are displeasing to Him. As He brings these sins and weights to our minds and we confess them before Him with contrition of heart, I am convinced that we will see a fresh outpouring of the Holy Spirit upon our lives, our churches, our nation, and the world.

Dr. Eddie L. Hyatt is an author, Bible teacher, and ordained minister with a vision for Spiritual Awakening in America and around the world. His numerous books on revival and Spiritual Awakening are available from Amazon and his website at www.eddiehyatt.com/bookstore.html. To schedule him to speak at your church, group, or conference, send an email to dreddiehyatt@gmail.com, and visit his website at www.eddiehyatt.com.