THE PROPHETHOOD OF ALL BELIEVERS 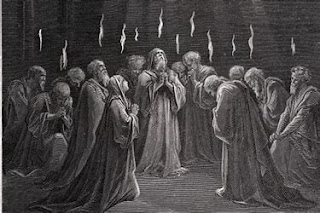 Robert Morris, Senior Pastor at Gateway Church in Southlake, TX, told of an individual approaching him and saying, “You have lots of good leaders around you but you don’t have a prophet.” Morris said he replied, “I don’t need a prophet; I have the Holy Spirit.”

Morris obvisouly understands that there is a great difference between the Old Testament era, when the masses were dependent on prophets to hear from God, and the New Testament era wherein the Holy Spirit is given to every believer and all have the potential to hear from God.

In the Old Testament, the work of the Holy Spirit was confined and limited. He came only upon certain prophets, judges, and kings such as Moses, Deborah, Gideon, Samuel, David, and Elijah. He came only at certain times and for special occasions, such as the dedication of Moses’ tabernacle and Solomon’s temple. The masses were not privileged to have the Spirit of God and had to enquire of a prophet in order to hear from God.

This all changed, however, with the coming of the Messiah and the promised outpouring of the Holy Spirit on the Day of Pentecost. With the coming of Messiah Jesus and His redemptive work, a new era dawned. The ministry of the prophet was not discontinued; it was expanded to include the entire believing community. This is what Dr. Roger Stronstad has called “the prophethood of all believers.”

In Jewish/rabbinic tradition, this passage was associated with the coming of the Messiah and the messianic age, also known as “the last days.” The messianic age would be a time when, unlike the era in which they lived, the Holy Spirit would be poured out on all of God’s people. Gender would not be an issue as both sons and daughters would prophesy. Age would not matter and even the very lowest of society—the menservants and maidservants—would experience this outpouring of the Holy Spirit and would prophesy.

On the Day of Pentecost, when the Holy Spirit was being poured out and the disciples were speaking in other tongues, Peter explained to the questioning onlookers what was happening by quoting Joel’s prophecy. Peter made it clear that the messianic blessing for which they were looking had arrived. He did this by pointing out that this is that; in other words, this that you see happening here today is that which Joel prophesied would come to pass.

Peter further made his point by substituting Joel’s it shall come to pass afterwards with it shall come to pass in the last days. As far as Peter was concerned, the death, resurrection, and ascension of Jesus had ushered in the promised era. The last days had dawned and the Spirit of prophecy was now being made available to all who would receive Jesus, the risen Savior and Lord (Acts 2:14-18).

Moses also spoke of this wonderful era when God’s Spirit would be made available to all of God’s people. When a young Joshua wanted him to stop two elders from prophesying in the camp, Moses passionately replied, Are you jealous for my sake? He then earnestly declared his heart’s desire,

Oh, that all the LORD'S people were prophets and that the LORD would put His Spirit upon them (Num. 11:29).

Has thus reported the actual historical fulfillment of Moses’s earnest desire: Would that all the Lord’s people were prophets, and that the Lord would put His Spirit upon them (Hyatt, Prophets and Prophecy, 105)!

A Nation of Prophets

What a change from former times when the masses would have to seek out a “prophet” to hear from God. Now the prophetic Spirit is resting on all of God’s people, and the gift of prophecy is potentially available to all. Prophecy is no longer the province of certain individuals, but now belongs to the entire community. Stronstad says,

Here in Luke’s narrative, for the first time ever in the redemptive history of God’s people, those people truly function as a nation of prophets—the prophethood of all believers (Hyatt, Prophets and Prophecy, 106).

This is the context for understanding the words of John in John 7:39 where he says that the Holy Spirit was not yet given. John spoke this when quoting the words of Jesus during the Feast of Tabernacles in Jerusalem when He cried out, Whoever is thirsty let him come to Me and drink; as the Scripture has said, “Out of his belly will flow rivers of living water.

At that point in history (before Pentecost) the Holy Spirit had only been given to certain prophets and kings, to John the Baptist in the womb, and to Jesus at His baptism. The time when all of God’s people would have the Spirit of God was still future. That time arrived on the Day of Pentecost when they all were filled with the Holy Spirit and all began to speak prophetically as the Spirit gave them utterance (Acts 2:4).

No Elite Company of Prophets
In the New Testament Church

There is a popular contemporary teaching that God began restoring the “office” of the prophet to the church in the 1980s. The problem with this idea is that neither Jesus nor the Twelve instituted church “offices.” In fact, the word “office” is not found in the Greek New Testament.

Although the English word “office’ is found in I Timothy 3:1, it has been added by the translators and is not found in the Greek. The passage literally reads, If anyone desires oversight, he desires a good work. The language is functional, not official.

Words used to describe leaders in the New Testament, such as apostle, prophet, pastor, bishop, etc., are functional in nature describing the leaders’ task, rather than official describing their authority and status. They are never used as titles.

In Acts, for example, Luke mentions Paul by name more than 120 times and not once does he say, “Apostle Paul,” but merely “Paul.” In 2 Peter 3:14, Peter refers to our beloved brother Paul. In Rev. 1:9, John the apostle, in his letter to the churches, refers to himself as your brother and companion in tribulation.

Their obvious avoidance of titles is understandable in light of the words of Jesus in Matt. 23:6-12 where He warned His disciples about adopting titles that would set themselves apart from others. He obviously saw His disciples as a band of brothers and sisters. He said,

The early church obviously took this admonition of Jesus seriously, which is why Rudolph Bultman, a liberal theologian, but an astute historian, said,

Neither in the earliest Palestinian congregation nor in earliest Hellenistic Christianity was there originally any thought of establishing church regulations and offices (Hyatt, Prophets and Prophecy, 108).

Some will surely ask, “But what about certain individuals like Agabus and Silas who are referred to as prophets in the book of Acts?” First of all, note that they are never called “Prophet Agabus” or “Prophet Silas.” The word is never used as a title.

Fee is, no doubt, correct when he says that those who are referred to as “prophets” in the New Testament are merely those who prophesy more than the other members of the prophetic community. In other words, the designation is functional, not official.

For example, it is obvious that in Paul’s use of the noun “prophet” in I Corinthians 14:29-32, he is using functional language meaning “the one prophesying.” Although some think he is referring to a special group of “prophets,” it is obvious that the whole community is being addressed.

This is confirmed by the fact that inclusive language is used throughout, such as in 14:32, where he says, For you can all prophesy one by one, that all may learn and all may be encouraged. Fee comments on this passage, saying,

This does not mean, of course, that all will or do prophesy. It is simply to note that Paul’s concern here is not with a group of prophets, but with the functioning of prophecy in the assembly. The noun “prophets,” therefore, is to be understood as functional language similar to the use of interpreter in v. 28 (Hyatt, Prophets and Prophecy, 109).

In the Old Testament era, when the masses did not possess the Holy Spirit, individuals would seek out a prophet to hear the mind and heart of the Lord.  In the New Testament, however, there is not a single example of someone seeking out a “prophet” to hear from God. Neither is there a single example of Paul, or any New Testament writer, instructing their readers to seek out the “prophets” in their midst to hear what they have to say.

To tell New Testament believers to seek out a prophet would be a reversion to a former and less desirable time. Instead, the obvious assumption is that they all have the Spirit of God. The emphasis is on everyone living in the Spirit, adhering to the Scriptures, loving one another, listening to one another, and keeping Christ central.

A Truth Whose Time Has Come

Let us remember the words of Paul in in I Tim. 2:5. He wrote, For there is one God and one Mediator between God and men, the Man Christ Jesus. The prophethood of all believers is a truth whose time has come.

This article is derived from Dr. Eddie Hyatt’s latest book, Prophets and Prophecy, available from Amazon and his website at www.eddiehyatt.com.