THE UNCOMMON ROMANCE AND MARRIAGE OF JONATHAN EDWARDS AND SARAH PIERPONT

She was six years old the first time he saw her, and he was thirteen. She was the daughter of the pastor of the Congregational (Puritan) Church in New Haven, Connecticut. He was a newly enrolled student at Yale College, also located in New Haven, where he had come to prepare himself for God’s service. During his seven years at Yale and attending the Congregational Church in New Haven, he noticed in her a peculiar devotion to God that he found very attractive and similar to his own.
After graduating from Yale at the age of 17 and at the top of his class, he continued his studies for the M.A. and worked as a tutor in the college. During the summer of 1723 he returned to his family home in East Windsor, Connecticut where he intended to study and give thought and prayer to his future.
True Beauty and Real Love
Jonathan Edwards (1703-58) could not, however, get the young woman in New Haven, Sarah Pierpont (1710-58), off his mind. It was not her physical features that captivated and enthralled him; it was the beauty of her character and devotion to God—what King David called the beauty of holiness (Psalm 29:2).
One day, while trying to study New Testament Greek, his mind kept wandering to thirteen year old Sarah. As he thought on her, Jonathan, who would become the famous theologian and pastor of the Great Awakening, wrote the following in the flyleaf of his Greek grammar.
They say there is a young lady in New Haven who is beloved of that Almighty Being, who made and rules the world, and that there are certain seasons in which this great Being, in some way or other invisible, comes to her and fills her mind with exceeding sweet delight, and that she hardly cares for anything, except to meditate on Him — that she expects after a while to be received up where He is, to be raised up out of the world and caught up into heaven; being assured that He loves her too well to let her remain at a distance from Him always. There she is to dwell with him, and to be ravished with his love and delight forever. Therefore, if you present all the world before her, with the richest of its treasures, she disregards it and cares not for it, and is unmindful of any pain or affliction. She has a strange sweetness in her mind, and singular purity in her affections; is most just and conscientious in all her actions; and you could not persuade her to do anything wrong or sinful, if you would give her all the world, lest she should offend this great Being. She is of a wonderful sweetness, calmness and universal benevolence of mind; especially after those seasons in which this great God has manifested Himself to her mind. She will sometimes go about from place to place, singing sweetly; and seems to be always of joy and pleasure; and no one knows for what. She loves to be alone, and to wander in the fields and on the mountains, and seems to have someone invisible always conversing with her.
Sarah was from a long line of distinguished Puritan preachers. In fact, her great great grandfather was Thomas Hooker, the well-known Puritan theologian and preacher who founded Connecticut. Another great grandfather had been the first mayor of New York City. Her father, James Pierpont, was the pastor of the Congregational Church in New Haven and the founder of Yale College, now Yale University. From childhood, she was convinced that her life was to be lived for the glory of God.
A Peaceful Home that Impresses Many 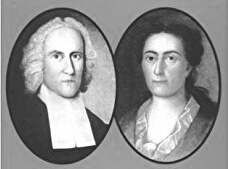 Dr. Eddie Hyatt is an author, ordained minister and founder of the "1726 Project" whose purpose is to reconnect America with her severed roots in the Great Awakening that tranformed Colonial America. The above article is derived in part from his books, 1726 and Pilgrims and Patriots.