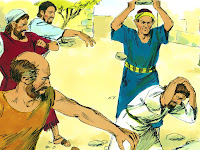 
This article is derived from Dr. Eddie Hyatt's the book PURSUING POWER: How the Historic Quest for Apostolic Authority and Control Had Divided and Damaged the Church, available from Amazon and his website at www.eddiehyatt.com.
Posted by Eddie Hyatt at 8:44 AM