A PRAYER MEETING THAT CHANGED THE WORLD, AND THE WOMEN WHO HELPED IGNITE IT

One hundred and twelve years ago on April 14, 2006, a home prayer group moved its prayer meeting from 214 Bonnie Bae Street to an old dilapidated building at 312 Azusa Street in downtown Los Angles. From there, the prayer meeting became the famous Azusa Street Revival and from this humble location the message of Pentecost was spread around the world.
The move was made necessary when the crowds began to overflow onto the porch and into the yard of the Asberry home after a powerful outpouring of the Holy Spirit with many speaking in tongues and gifts of the Holy Spirit being manifest. This prompted the group to search for, and obtain, a larger facility for their prayer meeting.
The old 40’ x 60’ two-story structure they found at 312 Azusa Street had formerly been a Methodist Episcopal Church, but more recently had been used as a stable and warehouse. They removed the debris and installed rough plank benches and a makeshift pulpit made from wooden shoeboxes. On April 14, 1906, they held their first meeting in the new facilities and revival fires blazed even more brightly.
Prayer Released Power
Although the prayer meeting was soon organized into a church that they called "The Apostolic Faith Mission," prayer continued to be the foremost activity. One participant wrote, "The whole place was steeped in prayer."
William Seymour, the recognized leader, spent much of his time behind the pulpit with his head inside the top shoebox praying. An unpretentious man, Seymour’s intense prayer life was rooted in a deep hunger for God and a recognition of his own human frailty. In later life, he wrote,
Before I met Parham, such a hunger to have more of God was in my heart that I prayed for five hours a day for two and a half years. I got to Los Angeles, and there the hunger was not less but more. I prayed, “God, what can I do?” The Spirit said, “Pray more.” “But Lord, I am praying five hours a day now.” I increased my hours of prayer to seven and prayed on for a year and a half more. I prayed to God to give what Parham preached, the real Holy Ghost and fire with tongues with love and power of God like the apostles had (Hyatt, 2000 Years of Charismatic Christianity, 141-42)
A spirit of prayer thus continued to characterize all aspects of the revival. Ernest S. Williams, who later became general superintendent of the Assemblies of God, visited the revival as a young man in 1907 and was astounded at what he encountered. Many year later, he wrote,
I wish I could describe what I saw. Prayer and worship were everywhere. The altar area was filled with seekers; some were kneeling; others were prone on the floor; some were speaking in tongues. Everyone was doing something; all were seemingly lost in God. I simply stood and looked, for I had never seen anything like it (Hyatt, 2000 Years of Charismatic Christianity, 144).
Women Played Prominent Roles
Although Seymour was acknowledged as the leader of the Azusa Street Revival, it was a black woman, Lucy Farrow, who provided the initial spark that ignited that revival. According to Mother Cotton, an early participant in the revival, no one spoke in tongues until Farrow arrived and began laying hands on the people and praying for them to be filled with the Holy Spirit.
Farrow, who was the niece of the famous abolitionist, Frederick Douglas, had been Seymour’s pastor in Houston and he first heard of the baptism in the Holy Spirit and speaking in tongues from her. That she was held in high esteem by Seymour, is indicated by the fact that he specifically asked her to come from Texas to Los Angeles to teach them about the baptism in the Holy Spirit. This occurred while they were still meeting in the Asberry home on Bonnie Brae Street.
It was only after she arrived and began laying hands on people that the prayer group experienced an outpouring of the Holy Spirit with many speaking in tongues and other Spiritual gifts being manifest. A contemporary said, “She had an amazing gift for laying hands on people and them receiving the baptism in the Holy Spirit.”
It was Farrow’s example, no doubt, that resulted in women having out-front roles in the revival. Many women evangelists, missionaries, church planters and pastors went out from the revival. The January 1908 issue of The Apostolic Faith, the official publication of the revival, carried a statement about the role of women. It reads,
Before Pentecost, the woman could only go into the “court of the women” and not into the inner court. But when our Lord poured out Pentecost He brought all those faithful women with the other disciples into the upper room and God baptized them all in the same room and made no difference. All the women received the anointed oil of the Holy Ghost and were able to preach the same as men. They both were co-workers in Eden and both fell into sin; so they both have to come together and work in the Gospel.
The Revival Impacts Modern Muslim Nations
The impact of the revival was phenomenal, with its influence spreading around the globe. This was made personally real to me when, in 2006, Susan and I were invited to be part of the ministry team for “Azusa Asia-Indonesia,” which was organized by Spirit-filled Asian believers to commemorate the 100-year anniversary of the Azusa Street Revival. 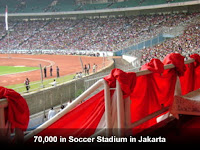 Held in Jakarta, Indonesia, the largest Muslim nation in the world, I had the privilege of speaking to 70,000 people in the soccer stadium. This was not an evangelistic crusade, but a gathering of Spirit-filled, Asian believers who had come together to honor the Azusa Street Revival as a vital part of their spiritual heritage. Seymour, Farrow and others must have been smiling. 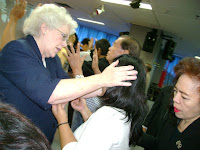 Susan preached twice in a large Spirit-filled church in Jakarta pastored by a woman, who was one of the supporters of Azusa Asia-Indonesia. In her home city of Jakarta, she was following in the footsteps of Farrow, Crawford and many other women who went forth from Azusa Street to preach the Gospel.
Sue also spoke at Bethel Seminary, which was located in a reputed jihadist area. In both places she saw many of the same manifestations that would have occurred at Azusa Street such as weeping, falling to the floor and speaking in tongues.
This experience highlighted for me the pervasive influence of the Asuza Street Revival for here we were in the largest Muslim nation in the world celebrating the 100-year anniversary of that revival. It was also a reminder that we are living in the time period spoken of in Acts 2:17, where Peter said,
“In the last days,” says God, “I will pour out of My Spirit on all people. Your sons and daughters will prophesy, your young men will see visions, your old men will dream dreams. Even on My servants, both men and women, I will pour out My spirit in those days, and they will prophesy.”
What the Church Needs Now
The outpouring of the Holy Spirit that began on the Day of Pentecost was preceded by at least seven days of intense prayer in the upper room, and prayer continued to be a vital and fundamental part of the life of the early church.
In a similar way, the power of Azusa Street was preceded by times of intense prayer and seeking after God. Arthur T. Pierce was correct when he said, “There has never been a spiritual awakening in any country or locality that did not begin in united prayer.”
What, therefore, is needed in the church today is not better preachers or more talented singers or a different church order. To borrow from the words of E.M. Bounds,
What the Church needs to-day is not more machinery or better, not new organizations or more and novel methods, but people whom the Holy Ghost can use – people of prayer, people mighty in prayer. The Holy Ghost does not flow through methods, but through people. He does not come on machinery, but on people. He does not anoint plans, but people—people of prayer, people mighty in prayer.


Dr. Eddie Hyatt is the founder of "America Reawakening" whose purpose is to educate Americans concerning their true Christian heritage, and to inspire the Christians of America to unite in praying for another great, spiritual awakening. His books on revival are available from Amazon and his website at www.eddiehyatt.com.