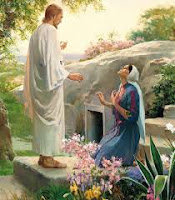 During the forty days between His resurrection and ascension, Jesus appeared to His disciples at various times and on one occasion appeared to over five hundred of His followers.
The gospel writers, however, are very explicit in noting that it was Mary Magdalene to whom He appeared FIRST after His resurrection. The importance which the evangelists attach to this fact indicate that it was no accidental occurrence, but that Jesus purposely appeared first to Mary Magdalene.
A Purposeful, Intentional Act
Jesus knew that actions speak louder than words and He taught His disciples, not just by precept, but first of all by example. When He wanted to teach them about humility He did not, first of all, give them a lecture. He demonstrated the virtue of humility by taking the role of a slave, girding Himself with a towel and washing His disciples' feet.
When He desired to teach them about faith, He first demonstrated the power of faith by cursing a fig tree and allowing the disciples to see it wither and die. Only then did He give them a lecture about the power of faith.
Therefore, in appearing first to Mary Magdalene, Jesus was making a very important statement to His followers. It was a statement, perhaps, that they could not have grasped and retained by a mere lecture. This statement was further clarified and enhanced by the words which Jesus spoke to her on this occasion.
Mary Receives the First Apostolic Commission from the Risen Lord
When Jesus appeared to Mary Magdalene He gave her certain, specific instructions. Matthew 28:10 records His words to Mary: "Go and tell my brethren...."
In other words, He sent her on a specific mission defined by the words, "Go and tell." Interestingly, the New Testament word apostle literally means "one who is sent" or "a sent one." Mary, therefore, was a "sent one" and as such received the first apostolic commission from the Risen Lord.
Her commission was to go and tell the other disciples that Jesus was risen. What is preaching but telling about Jesus and His resurrection? A perusal of the book of Acts will, in fact, reveal that the essence of the preaching message of the early church was Jesus and the resurrection.
Mary, therefore, received the first apostolic commission to preach the good news of the resurrection. And notice that her commission was not limited to a "women's ministry," for Jesus instructed her to "Go and tell My brethren." She, in effect, became the apostle to the apostles.
The Resurrection of Jesus Ushered in a New Day
By appearing first to Mary Magdalene and giving her an apostolic commission, Jesus was saying that His death and resurrection had ushered in a new era of freedom for all of humanity. He was saying that sexism and racism would not be tolerated in His kingdom. Paul echoes this in his letter to the Galatians saying that in Christ there is neither Jew nor Greek ... there is neither male nor female (3:28).
This was revolutionary thinking since the orthodox Jewish man of this time normally began his day with a prayer that included thanks to God that he was not born a Gentile, a slave, or a woman. It was revolutionary thinking because in both Roman and Jewish courts of law, the testimony of women was not allowed as evidence.
By appearing first to Mary Magdalene Jesus was, therefore, cutting through all the disdain and prejudice of his male disciples toward his female disciples. He thereby declared His equal acceptance of women and confirmed their ministry by bestowing on Mary the first apostolic commission after His resurrection.
True Revival Elevates Women
In her groundbreaking book, In the Spirit We’re Equal, Dr. Susan Hyatt documents how during times of Spiritual awakening women emerge to the forefront with men in ministry and leadership.
This was true in the Methodist revival where John Wesley had to deal with the fact that women were being anointed to preach as well as men. He finally yielded to the reality of what the Spirit was doing and began giving his approval to women preachers.
He realized that the authority to minister is rooted in one's possession of a divine call or gift and ordination is simply the Church's recognition of that gift. When asked why he gave recognition to women preachers, Wesley replied, "Because God owns them in the conversion of sinners, and who am I that I should withstand God."
We Must Not Quench the Spirit
Based on a faulty interpretation of two passages by Paul about women, much of the church has ignored Jesus’ powerful resurrection statement and refused to recognize the gifts of its female members. In doing so they have also violated Paul's command in I Thessalonians 5:19 not to quench the Spirit.
As a result of this disobedience, many gifts have lain dormant while millions have perished without Christ and the Church has languished in defeat. The Great Commission has not been fulfilled and the Lord's coming has been delayed. It is thus time for the Church to allow the gifting of the Spirit rather than religious tradition to determine who should “go and tell.”
If the Church will be open to God's gifts in both women and men this decade might yet see the greatest Spiritual awakening yet known. Psalm 68:11 might yet be fulfilled which, in the Hebrew, literally says, The Lord gave the word and a great company of women proclaimed it.
Jesus appeared FIRST to Mary Magdalene to affirm every woman who has ever heard His call to "Go and Tell."

Dr. Eddie Hyatt is the author of Paul, Women andChurch, available from Amazon and from his website at www.eddiehyatt.com. He and his wife, Dr. Susan Hyatt, are establishing the Int'l Christian Women's Hall of Fame in Grapevine, Texas. To read about this project go to https://www.gwtwchristianwomenshalloffame.com/
Posted by Eddie Hyatt at 7:53 AM