THROW OUT THE WITCHES' BREW

It is being reported that witches and warlocks are coming out in force and seeking to mix a magical brew that will do damage to Donald Trump and his supporters. Many Christians seem frantic and even frightened at this report. I want to suggest, however, that the only brew they can mix is one of fear and every Christian should throw it out as useless and worthless.
This fact was made real to me many years ago when a well-known witch attended services in the church Sue and I were planting in eastern Canada. Several people came to me very concerned about the presence of this witch. They wondered if she was trying to work some spell or magical charm on our fledgling congregation.
God Teaches Me Not to Fear Witches
Out of concern, several of us met together to pray about the situation. While praying, I saw a vision of a room filled with smoke (representing witchcraft) and then a wind (representing the Spirit of God) that came along and blew the smoke away. The smoke had no substance or strength with which to resist the wind, and it was suddenly gone.
At the very same time another person saw a similar vision and then a powerful, prophetic word came forth that gave me a new perspective on the devil. God said, My power is so far surpassing any power possessed by the devil, he is not worthy of the attention you are giving him.
It was obvious that the Holy Spirit was not happy with the attention we were giving to this witch. Around this same time, I came across a book by Judson Cornwall, a well-known leader in the Charismatic Renewal, that confirmed our experience.
Cornwall told how as the pastor of a certain congregation, he would begin each service by taking authority over the devil, binding all the demons, silencing them, and telling them they had no place in that meeting. He religiously repeated this routine at the beginning of each meeting.
One morning, during his quiet time with God, he heard the Holy Spirit say, “Demons are coming from all over this region to be in your services.” He was shocked and asked, “Why Lord?” The Holy Spirit replied, “Because you give them recognition.” Needless to say, he stopped giving such recognition to the enemy.
His experience, of course, confirmed what I had heard from the Holy Spirit--that the devil is not worthy of the attention we were giving him. Demons love attention and you will probably not find a greater concentration of demons than at a spiritual warfare conference where they are the center of attention.
Such preoccupation with the devil denies the reality of the overwhelming victory wrought by Christ, which He expressed when he came out of the tomb and declared, All authority is given to me in heaven and in earth. As a student in Bible school, I heard a guest teacher quote this verse and then ask, “If Jesus has all authority, how much does that leave the devil?” I never forgot that question.

Satan is No Match to the Power in You

The overwhelming victory of Christ over Satan is delineated by Paul in Ephesians 1:15-23. He speaks of Christ being raised from the dead by the mighty power of God and then being seated at His right hand in the heavenly places.
The “right hand” in Scripture is symbolic of authority and power. Psalm 98:1, for example, says of God, His right hand and His holy arm have gotten Him the victory. When Paul says that Jesus is now seated at the right hand of God, he is saying that Jesus is seated at the pinnacle of the universe, in the place of ultimate authority and power.
This place where Christ is seated is far above all principality and power and might and dominion, and every name that is named, not only in this age but also in that which is to come (Eph. 1:21). It doesn’t matter what kind of principality or power it may be—even Satan himself--the place where Christ is seated is far above them all.
And here is what is incredible! Paul says that the same power that raised Jesus from the dead and seated Him in that place of ultimate authority--far above any power possessed by the devil--is now at work in you and me. No wonder Satan trembles at the child of God who knows his/her position and authority in Christ.

Satan’s Only Power Resides in His Ability to Deceive.

Stripped of all authority, Satan can only wield influence in the earth through lies and deceptions. That is why Rev. 12:9 refers to him as that serpent of old, called the Devil and Satan, who deceives the whole world. Jesus said of him, When he speaks a lie, he speaks from his own resources, for he is a liar and the father of it (John 8:44).
This is why Jesus said in John. 8:32, And you shall know the truth, and the truth will make you free. The truth of God dispels the lies of Satan even as light dispels darkness. When the lie is gone, Satan has no ground or place to operate. Nothing, therefore, can take the place of God’s word in the church and in our personal lives.

Paul obviously understood this when he went to Ephesus around a.d. 54. This is indicated by the fact that he did not get preoccupied with protesting and fighting the idolatry and magical practices that permeated the city. He certainly had opportunity for not only was Ephesus the center for worship of the goddess, Artemis, it was also a famous center of the occult and magical practices.
Magicians swarmed her streets and marketed their spells, charms, amulets, rules for dream interpretation and books of divination. The proliferation of magical incantations and formulas in Ephesus were collected into a book known as the “Ephesian letters” and spread throughout the Greco-Roman world. Albert Barnes, in his Notes on Acts 19:19, says,
The Ephesian letters, by which incantations and charms were supposed to be produced, were much celebrated. They seem to have consisted of certain combinations of letters or words, which, by being pronounced with certain intonations of voice, were believed to be effectual in expelling diseases, or evil spirits; or which, by being written on parchment and worn, were supposed to operate as amulets, or charms, to guard from evil spirits or from danger.
Interestingly, there is no indication that Paul got “bogged down” in any of the popular “spiritual warfare” methods that are so popular today in charismatic circles. He showed no fear whatsoever. In fact, the clear implication of Acts 19:35 is that Paul never preached a sermon against the goddess during his time in Ephesus.
Why? He was too busy preaching the truth of Jesus and what He had done. He knew that only the truth of God’s word would dispel the lies by which the people of Ephesus were held captive. His approach was so successful that people began to publicly burn their books of magic. So many turned to Christ that it eventually affected the economy of the city. Acts 19:20 says, So the word of the Lord grew mightily and prevailed.
T.L. Osborn Refuses to Give Recognition to the Devil
Before he passed away, I heard the elder statesman of miracle evangelism, Dr. T. L. Osborn, tell about preaching in an outdoor crusade in Africa. Many thousands were in attendance including hundreds of witch doctors who had come there with their fetishes to work their magic against the foreign preacher.
Before going on the platform, the African pastors wanted to lay hands on him and pray for his protection from the devil. T. L. refused their prayer. He said, “I would not insult my Lord in that way.” T. L. focused his attention on preaching the Good News of Jesus that day and thousands came to Christ and many were miraculously set free from all kinds of illnesses and bondages. The witch doctors went away helpless and some Christian pastors realized that they did not have to be preoccupied with the devil.

Practical Suggestions for Throwing Out the Witch’s Brew

·                         Keep Jesus at the center.
He alone is worthy of our undivided attention. Worship Him. Honor Him. Satan will not hang around a person or congregation where Jesus is being continually exalted.
·                         Know your authority in Christ.
James 4:7 says, Therefore submit to God. Resist the devil and he will flee from you. The Greek word translated “flee” in this passage means to “run in terror.” It has the connotation of someone being so frightened that their hair is standing on end. That is Satan’s response to the believer who knows his/her authority in Christ.
·                         Know the Power of God’s Word.
When Jesus was confronted by Satan during the wilderness temptation, He answered each temptation with, It is written, followed by an appropriate Scripture. He overcame Satan with the same weapon that is available to each of us—the Word of God.
Conclusion
The witches' brew is one of fear, but you don’t have to drink it. Throw it out! Declare the authority of Christ and His supremacy over all. Declare Christ’s authority and protection over the very persons and things the witches want to damage and destroy.
The most learned witch is no match to the smallest babe in Christ who knows his/her authority as a child of Almighty God. Throw out the witches' brew!

Dr. Eddie L. Hyatt is an author, Bible teacher and revivalist whose books are available from Amazon and his website at www.eddiehyatt.com, where you can also read about his vision for America and the world. 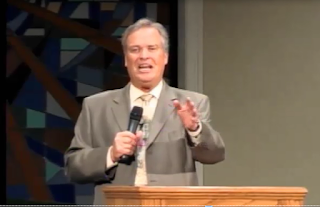